This is the first in a series of posts that will cover a recent shootout done with three popular handheld recorders against a reference setup. This test is not in any way exhaustive, and in no way constitutes my endorsement of anything - all opinions are my own.

The portable recording device market has exploded in recent years, and everyone is looking around wonder which one to buy - so I’m here to help! The specific purpose of the shootout is to evaluate the recorders through the lens of sound designers and field recordists, and to measure them against an industry standard field recording setup. I’m testing out three recorders against a reference setup - the test includes: 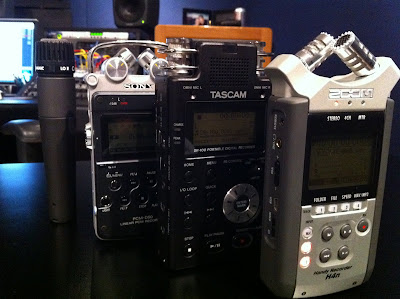 Part 1 of this review is measuring stats and features. Listening test comes in part 2.

I’ve owned the D50 almost since it came out, having purchased it to replace my plasticky H4. The DR-100 is a recent acquisition for me, but I’ve taken it out enough to be familiar with it. The H4n has been at use at the office for a while, and I’ve taken it out on several shoots. The sound devices rig speaks for itself, and is included as a pure benchmark against which to measure the other recorders.

Lets start with the bottom line:

The D50 is nearly 1.5x the price of the other two, though the price point for each of the handhelds is peanuts compared to the big boy Sound Devices rig.

The D50 sorely misses XLR inputs, as the 3.5mm stereo jack lacks phantom power and is just about unusable in my experience. The DR-100 has adequate I/O, but the Zoom wins with its Neutrick combination jacks. The Sound Devices rig has 2 XLR inputs, but goes into specialty jacks quickly after that.

I have not run a scientific battery life test on these devices, but after a few months of usage for each the battery life ratings are what I believe to be accurate. The bottom line here is that D50 is the single most battery efficient piece of electronic equipment I own. The factory batteries lasted literally weeks of heavy use initially, and at 24 bit 96k the batteries far outlast the storage capacity, usually by an order of 3 to 6x depending on if I’m driving headphones. The H4n is the other end of the spectrum, sucking down batteries quickly and feeling a bit underpowered considering the size and brightness of the LCD screen and the ability to roll on 4 channels simultaneously. The DR-100 uses a proprietary battery that charges via USB and lasts long enough to be ok during a medium length record session. The ability to seamlessly switch to the AA backup is a plus.

The built in internal storage on the D50 is a nice touch IMO, but the implementation of memory stick as the expansion media is outdated and crappy. Not only is memory stick a dead format, but the device mounts both as separate drives for recording and data transfer. With that said, 4 gigs is plenty for most hand held recording type gigs, so its not exactly a deal-breaker. SD cards on the other two devices are more standard. 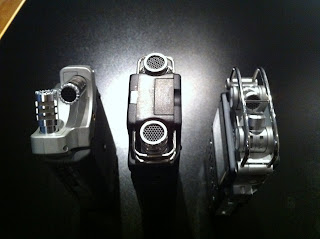 The D50 wins the mic mounting and versatility contest, which is important considering how much it relies on the built ins. The protective bars are both reassuring and useful for mounting wind protection, and the wide mic setup sounds very wide compared to the XY setup. The DR-100s unorthodox setup may make for stranger stereo imaging than the others.

While the DR-100 has more external switches than the D50 does, the D50 has more that are of use to a field recordist that is looking to adjust record settings quickly. The H4n relies more heavily on the menu system, and compensates by having multiple ways to navigate the menu and the largest LCD screen of the three. I give the edge here to the D50, but not by a wide margin.

The way that a recordist interfaces with a preamp is an important part of a device, and here we have less a clear winner than we do a clear loser. The DR-100’s ability to recess channels by splitting the preamp knob is a clear advantage over the D50, but the feel of the D50’s smooth metal knob really deserves points over the plastic counterparts of the competition. The H4n’s up and down arrows are functional, but

completely inadequate when one needs to make quick preamp adjustments in the heat of recording.

So based on pure stats and functionality the decision still depends entirely on how you plan to use it. Here’s how I would break it down:

Excellent build quality, just the right switches built into the chassis, swivel mics and a great preamp mean that this is a perfect candidate to always have by your side as a stand alone recording system. External mics are a no-go so more specialized applications like foley and voiceover recording should go to a different device, but this device is hard to beat for spur of the moment or low profile ambiances, music, crowds and other close or medium distance stereo sound sources.

Battery life means you can plant this device in a location and roll while waiting for audio to develop minutes and hours later.

This device is a workhorse when used in conjunction with external mics, and can make a great lightweight capture device for DSLR filming, VO recording, moving vehicle recording, etc - especially when recessing one channel for safety in critical situations. The built in mics aren’t as solid as the other devices, but are usable if in need.

Construction is plastic but solid and navigation is quicky and easy.

audience response (through the built in mics) of a live show. This is a functionality that the DR-100 lacks, and I’ve had great success using the H4n in that context. The built in mics are very good on their own right, though they don’t quite reach the level of quality of the Sony (while being better than those on the DR-100).

This device has become the industry standard for DSLR video shooters, though I’d still personally recommend the DR-100 over the H4n for that specific purpose both because of the recessed channel function, battery life, and preamp quality.

This is not to say the H4n has poor preamps, because it does not. Its just that the DR-100s are that much better.

Poor battery life and capacity are the biggest issues here.

So that’s how these things do on paper. In part 2 we’ll do a listening test that focuses on the built in mics. Stay tuned!

An interesting comparison, even if it's a barrel of not entirely apples. I have done numerous articles on the smaller hand-held recorders, including Revisiting the Sony PCM-M10 versus Olympus LS-10 / LS-11 Discussion, my latest.

The D50 can supply power to an external mic, but I believe it is a proprietary system. I saw a mic that Sony manufactured mic at AES that interfaces with the D50, should have written down the model number for that. The D50 automatically detects it and turns power on.

in which case, it might be that the D50 can power any electret microphone, but who knows

The D50 provides "plug in power," which is exclusive to electret mics.

I film with DLSR and I am about to buy a digital recorder to use with a Sennheiser 416.
The poor quality of the DR-100 recording (it sounds very much compressed) is related to the poor quality of it's internal mic?

Thank you very much!

yep, those are all internal mics.