Here's part 2 of the HH shootout - the listening test!

In this shootout I'm comparing the internal mics of the Sony PCM D50, Tascam DR-100 and Zoom H4n from a sound designer and field recordist's perspective. For reference I'm also including a sound devices 744t with a pair of SM81s in XY position as a benchmark. Part 1 covering comparative specs is here.

I feel like I did a good job here of calibrating the various devices to get a good solid apples to apples comparison of how the built in mics, limiters, and preamps compare. Each of the audio samples in this post are 100% unaltered with the exception of editing the clips. Once the preamps were set I never moved them for any of the tests. All are downloadable in full 24 bit 96k from the soundcloud links. If anyone is willing to host the longer unedited recordings I'll gladly post a link to those here as well. 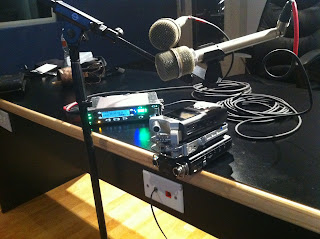 Setup on all devices was as follows:

The way I calibrated the preamps was to hold them at mix position and blow pink noise through the studio monitors at 70db spl, then adjust the preamps until the noise was peaking at around -12dbfs. 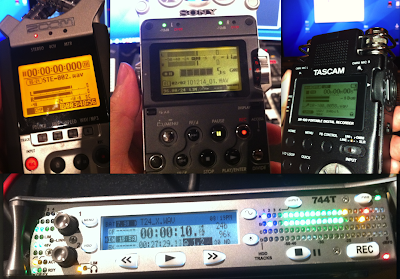 This step in itself was pretty instructive of what the devices are capable of and where they are happy in the recording zone. The D50's pre was set near 6, the DR-100 between 8 and 9, the H4n was set in the 90s, and the 744t was nearly wide open with the SM81s attached. The amount of gain left in the knob after setting 70db pretty hot like that was pretty indicative of how much juice each of these devices had left to give.

The other enlightening thing was listening to how the different pink noise recordings related to one another. Now, the noise was obv colored by the speakers and the room to some degree on the way out so you can't really compare the recordings to pure pink, but the relationship to one another was pretty eye opening. Here's the side by side comparison:

And here's what that looks like on a spectrogram: 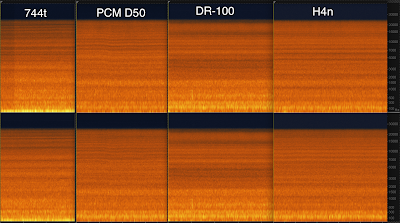 To my eyes and ears the DR-100 seems to really have deep broad dips around 4k and up in the 15k range. It also doesn't seem to extend above 20k as readily as the others, which has 96k implications. This also seems to make sense given that 96k functionality was added after the product was released as a firmware update - implying that the mics really weren't designed to reach up near and past the top end of the human spectrum.

The D50 and H4n were pretty similar, with the D50 being a little brighter and the H4n a little fuller. No major deficiencies in either though, which is nice. Both were a little thin around 300Hz compared to the SM81s on the 744t though.

The next test was a self noise room tone test. This was done in the control room, which had an ambient noise floor of about 40-45 db spl. With the preamp gains up this high it was a very good test of what you're getting as far as cleanliness on the mics and pres.

Both the H4n and the PCM D50 had minor but audible hiss at those levels, and the high freq dips on the DR-100s mics mitigated the hiss fairly effectively, though that's not to say that they were capturing a very true sound.

Next was a voice test. I just talked for a little while with my head about 12 inches in and centered up in front of the devices. I've only posted the short clipped comparison here, but I can post up a longer clip on each of there's any demand for that. Here it is:

The general theme here continues, as the DR-100 feels a little more lo-fi than the H4n and the D50, and all seem to lack the low end and low mids of the SM81s.

To get a feel of the stereo imaging of the devices as well as the foley recording characteristics I grabbed a bag and jostled it while walking from one side of the room to the other.

This was actually pretty interesting with regards to the stereo field because of how well the DR-100 performed with regards to imaging. Much clearer seperation than the XY setups, and no loss of the middle. Sound quality was still below the others however. The H4n started to differentiate itself here as well, with a better lower mid definition than the D50 when the bag was directly in front.

Now for some abuse - the limiter test! I did this test first by striking a piece of metal with a butter knife (which led to some interesting results), and then by striking a copper Noah Bell in the same manner. Listening to the bell ringout after jamming the limiters was pretty instructive here as well.

Here its also useful to see what's happening in the waveforms:

The 744t has an analog prefader limiter that catches clips before they get digitized. You can hear it working in the samples, but its pretty unobtrusive when you consider how hard I was hitting it there.

The PCM D50 has a "dual path digital limiter" which records a recessed channel about 20 db lower and inserts that into the signal if the limiter threshold is passed. In my experience that sounds excellent on short transients and horrible if you catch wind noise that triggers the limiter.

The DR-100 seems to have a radio-style limiter in the analog domain that engages quickly and then spends about 2 seconds slowly (slowly) releasing out to regular gain settings. That's kind of the opposite mentality of the Sony since it would probably be less intrusive if consistently pounded, but it is definitely more intrusive when it just encounters one spike.

The H4n must have digital limiters and no protection on the analog front end because oh man that sounds ugly.

The next test is what these recorders are most useful for - outside ambiances. Unfortunately the wind protection I had on the SM81s was not adequate, so all you'll hear here is the handheld devices. This is just general traffic outside the studio side by side.

Each seems to do this job well. I've recorded mountains of ambiances with the D50 and H4n, and have used them consistently and successfully.

Last test is more of a demonstration than anything. Here I'm opening and closing the trunk of my car with the devices about 2 feet away. This is mostly to demonstrate just how much of the environment gets left into any recording you make with these. The pickup patterns are just so wide that if you hope to get something isolated while out in the world you should be prepared for how much of the world you're bringing back with you to the studio.

So there it is. Hope you enjoyed it. Happy shopping!
Posted by Unknown at 10:03 PM

What a great resource, Rene, thanks for sharing this with the community! Fascinating to hear the differences...sometimes subtle, sometimes super pronounced. Very nice work!

hey, excellent review René, thank you for your effort

excellent! many thanks!
would love to hear the sony pcm m100 !

Is the site bugged or did someone remove the clips for ...other reasons?

I thought this was an awesome test and plan to make a purchase based off it but without reviewing them again, that plan seems all but shot.

Man, this was what I was looking for. I just moved to the Dallas area from PR and I'm beginnig short film making with my Canon 7d. I have to hear the audio on ur clips b4 I make up my mind.

Oh man, i've found what i wanted, yet !
Thanks a lots for those kinda porfessional answer.

Thanks for an excellent post. I've done a similar blog but focusing mostly on noise between units.