I've had the pleasure of working on a series called Bowlopolis for the BPAA recently, and through the first couple of episodes it became apparent that I needed to go out and record some fresh bowling sounds. SFX libraries were getting me by, but I felt the level of sound design could just go up a couple of notches.

So the gentlemen at the BPAA and the proprietors of Alley Cats in Arlington made thier facility available to me earlier this week. First and foremost, Alley Cats is a top-class facility that is much more than just a bowling center, and I'd recommend it highly.

Also, the staff was remarkably gracious and more than accomodating. They allowed me to come into thier facility more than an hour before opening, allowed me unfettered access to set mics up all over the place, and did a whole series of cool things like turning the lanes on and off while my mics were rolling, leaving lanes off while I chased balls with a mic, leaving lanes off while I poked the pins over with a boom pole, and even bowling a few games for me to record.

I didn't take enough pictures, but here's one of the generic setup: 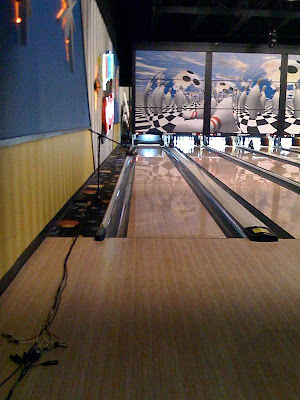 The overall setup was a Sure KSM-32 there by the lane where the ball makes its initial impact, a stereo Sure VP-88 in front of the pins and aimed at them, a Sure SM-57 back behind that backstop aimed down at the pins for the up-close-and-personal perspective, and of course my trusty Zoom H4 positioned about 8 feet behind that camera angle for ambience.

I also chased a couple of balls down the lane (while running along that side track there) with a Sennheiser MKH-60 shotgun mic.

In the end the recordings were fantastic, and as a happy accident I realized that I had captured an excellent surround setup as well. Back in the studio, I panned the mic on the lane and the one close to the pins hard center, the stereo mic hard left and right, and the ambient mics hard back. The result was some serious reality, and I just loved it.

The whole mess folded down to stereo very well, and i'll post a sample or two later on.

The best thing of it all though, was the fact that I was given the opportunity to do my job on the same level as the most elite and accomplished in my field. The good recordings that are hard to get require good projects, good equipment, and oftentimes exclusive access. This isn't the first time I've taken an ensemble of mics out to the world for recording, but I really do love it every time I do.

I have a really cool job.
Posted by Unknown at 3:16 PM No comments: