recording my moto: the VTX1300

My motorcycle has been sitting for too long, so I'm going to sell it.

Anytime an audio person makes the decision to sell a vehicle the first question is always "have I recorded it sufficiently?"

In my case the answer was no.  I'd recorded the bike before, but I had never really given it the full treatment, so I rolled it to work last week and set about recording it after hours but before the sun set.

This bike is a Honda VTX1300 with aftermarket Vance and Hines big shot exhaust.  Honda's VTX line has a big, beefy transmission that clunks loudly when you drop into and out of first, and the big shot exhaust really does that distinctive chopper cruiser sound well.

Outside of those two main elements I didn't see much else on the the bike that I felt as though I could record cleanly and at speed.  Tires were pretty out of the question, as was any noise that my feet made on the gear kicks.  My plan was to find the best compromise of drafting placement and proximity to the transmission/exhaust for the onboard mics.

Drafting is a huge deal anytime you want to record a vehicle going faster than about 10mph.  Drafting is the concept of placing mics within the shape and structure of a vehicle in a way that minimizes direct wind exposure when the vehicle is in motion.  No amount of wind protection will stop an 80mph direct exposure to wind, but proper placement will allow for minimal wind protection to be sufficient even at that speed.

Motorcycles are a little trickier than cars and trucks when it comes to this because they have less surface area on which to mount things and the bodies don't divert nearly as much wind around them, so drafting options are more limited.  This bike is pretty sporty and stripped down, which limited my drafting options further.

I decided to go with the following mic placements, wrapping each mic in a few layers of a cut up T-shirt:
here are the placement pix and isolated tracks of a 60mph run. 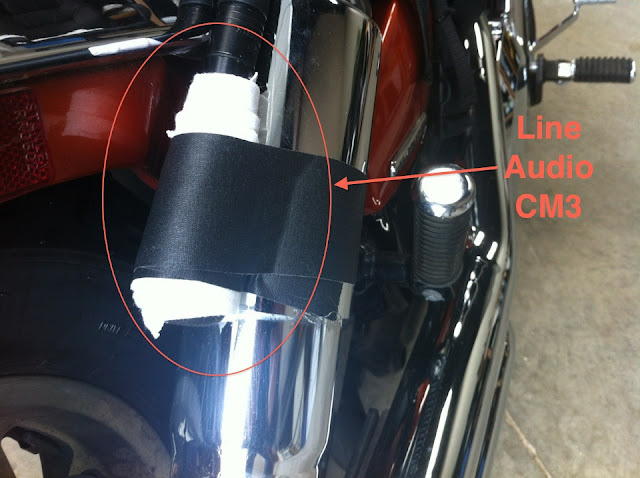 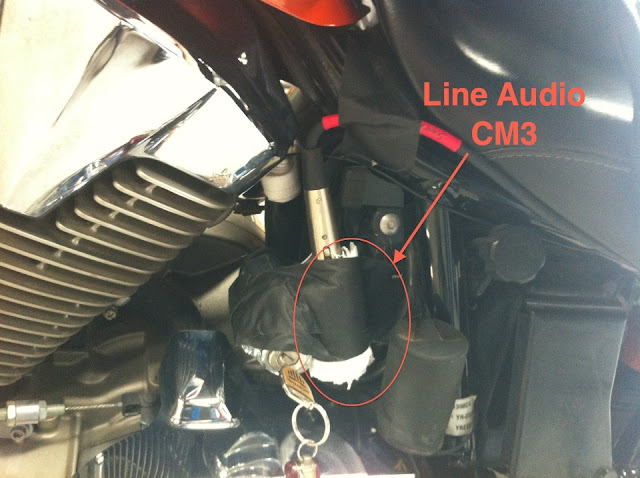 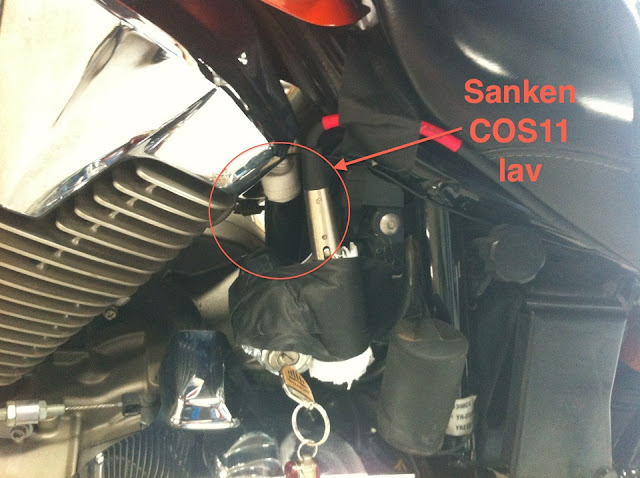 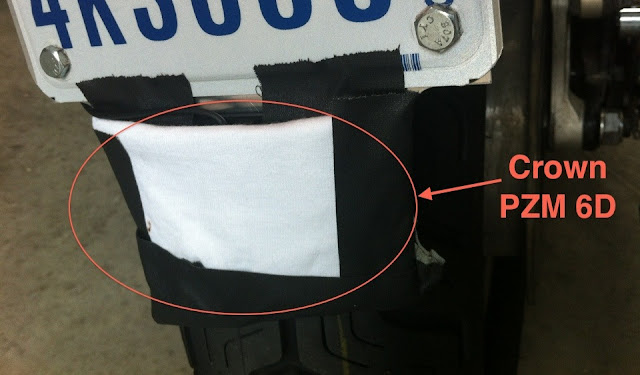 Of all of them, I feel as though I could have walked away happy with just the combination of the PZM and the Lav (which I almost didn't put up).  Both mics capture a ton of detail, and the PZM in particular felt like the gold standard of someone behind the vehicle moving at speed with a mic aimed right at the exhaust and no wind.  That mic just had tons of low end, and got the quick transient nature of the cylinders just right.

The CM3s acted a little wooly and took on the most wind of all the mics, though they were certainly still acceptable and in the end gave me some interesting lower mid punch that the other two mics weren't picking up.

When they all came together I just about came out of my seat because I heard for the first time a representation of what it really does sound like to be piloting that bike.

Everything is there.  The transmission kicks when I'm climbing the gears,  the whine as the engine lets up, the fluffy kind of release in the exhaust, and all of the power of that bike feels like its there.  The only thing missing is the wind, which is a pretty crazy experience given how intimate I am with the sound of this thing.

Its easily one of the best recordings I've ever made, and I feel like that PZM near the exhaust is going to be my new secret weapon when it comes to the exhaust portion of vehicle recordings.  That thing took zero wind behind about 4 layers of cotton T-shirt even at 80mph on the highway over a 10 minute ride I did the same day.  It was kind of magical.

I had my intern out helping me on the shoot, and he captured a perspective that I'm less familiar with: the exterior by.  He was running a 416 in a blimp and was tracking me as I passed.  These recording also came out great:

In all I got a full compliment of sounds from the favorite moto I've ever owned in about 3 hours of recording (including setup and teardown).

Things never seem to come together this well, so its important to sit back and appreciate it when they do.  Feel free to use these recordings in whatever context you see fit.

I wanted to test the new ribbon mic in a setting that would naturally compliment it.  That mic likes loud bright things because it has relatively low output and a smooth darkness to it that kind of tames things that can get shrill or scratchy.  It also has low end for days.

As such I figured a good garage door impact slam would do the trick.

I've only got the one mic, so I decided to run it as the figure eight of an MS config with my trusty Line Audio CM3.  That line audio mic has a similar personality to the ribbon (lower output and a darker sound) so I figured the two of them would get along great as an MS pair.  I also had a cloudlifter in line on the ribbon for impedance matching and signal output purposes.  I pretty much don't run that mic without it.

I also wanted to test this rig out against a known quantity, so I put up the workhorse Audio Technica 4050s in an MS pattern right next to them. 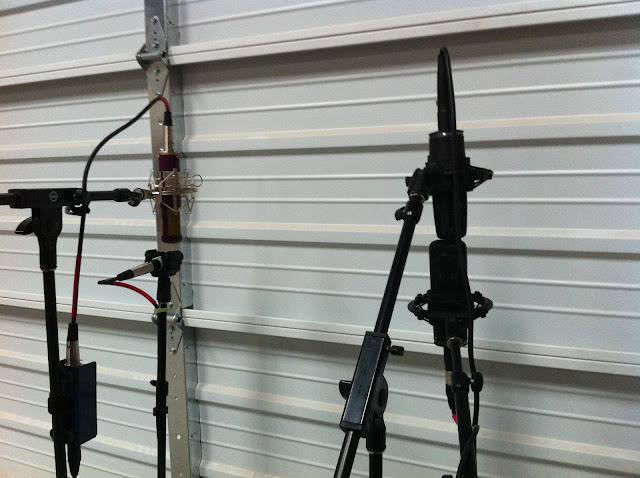 The results were pretty interesting.

In many ways the results were as expected.

The 4050s were significantly brighter than the CM3/Ribbon combo, and tracked the transients more closely.  They also sounded cleaner and more clinical, which in some situations is a good thing.  With that said, they still had significant low end punch and didn't sound thin at all.

The CM3/Ribbon combo was much darker, but the difference really was in how thick this combo made the low mids sound.  There was just tons of punch down there that was very satisfying.  This kind of rig takes EQ very well, but even when I experimented with adding some high end the predominate characteristic was that huge low mid presence.

The difference in the high end was most apparent when I opened the garage door and let the sounds of the birds and traffic from outside through.  The 4050s just opened up and revealed all of the damping that the doors were doing to the outside world.  The CM3/Ribbon combo kind of hung back and let the game come to them.

Given how these two signatures seemed to wrap around one another I figured I'd just add them together.  When overlaid against one another I got this huge thick sound that still had all of its detail and clarity.  Its a lot of mics to put up for one sound, but the end result sure seemed worth it.

Here's a spectrogram of the impacts, with the 20k line marked.

Feel free to download these sounds and use them in whatever context you see fit.  Enjoy!
Posted by Unknown at 10:36 PM 1 comment: