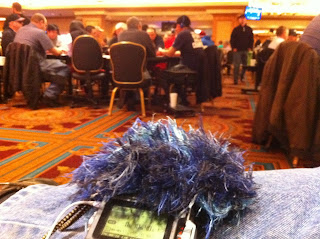 The poker room at the Winstar Casino is one of my old haunts, though I haven't visited in quite some time. This past weekend I decided to head out to play some cards because new year's weekend is always a crazy weekend up there, and I wanted to record some sounds and have some fun.

Winstar Casino is right on the other side of the Texas/Oklahoma border and is almost exactly one hour from my house deep in Dallas, so the drive has its own kind of tempo and ritual to me. One thing I've been doing recently is driving around on the weekends and scouting remote recording locations, and what I've discovered is that West, South and East of Dallas is pretty thick with family farms and other densely packed private property - even out in the rural areas. North towards Oklahoma is a different story though, and its something that I intend on exploring further. Lots of wide open expanses of nothingness up there, and those empty winds will find the edge of my mics soon enough. Until then, it was time to play some poker.

The poker room at Winstar is incredibly unique sounding for a few reasons: First off it is seperated from the rest of the casino by a long hallway, meaning there are no sounds of slot machines, sports casts, or other typical casino pollutants. Second it's a very popular room, typically hosting a few hundred players at any given moment. Third, they don't turn on the music or sports sound in the poker room unless its a big game either. The players are polite and the dealers are lively, so its nothing but pure, clean poker in there.

As you walk down the hall from the casino to the poker room you can hear the shift from clattering slot machines to the smooth drone of hundreds of people stacking chips and playing cards very distinctly. By the time you get to the back of the room the rest of the casino is completely out of earshot.

I took a seat and bought in for obvious reasons: I wanted to play, I didn't want to look suspicious, and I wanted the cameras to forget about me.

After about an hour and a half, I took a break from the table and went to the grill to order some food. While I was waiting I took a seat in the back of the room, pulled out my D50, propped it on my leg (as you can see in the pic), plugged my ipod headphones in and started rolling. Now I was a little nervous because I was positive that the players at the tables near me wouldn't approve of me rolling in their vicinities and I didn't want the floor to get involved and toss me out. Also I was up a couple of hundred bucks and had most of my table read pretty well.

I consciously had iPhone headphones out and I had them plugged into my D50 and not my iphone so that I could try to pass it off as a music playback device, which are ubiquitous in poker rooms. I also had the fuzzy on top of the mics to conceal them. Further, I had my phone out on my leg and was web surfing and emailing so that the cameras and passerbys would have something to look at. Then I sat still, set levels and rolled.

After ten minutes of gold I figured I was set so I put the recorder back in my pocket, grabbed my sandwich and went back to my seat. After playing for a few more hours I was still ahead so I packed up and left. I considered catching the sounds of the casino down the hall, but I realized that I already had the more interesting sound in my possession and my dog was going to need to go outside and do her business pretty soon.

All in all a great trip, and I'm more inspired than ever to continue heading North and trekking for sounds.
Posted by Unknown at 7:33 PM 7 comments: