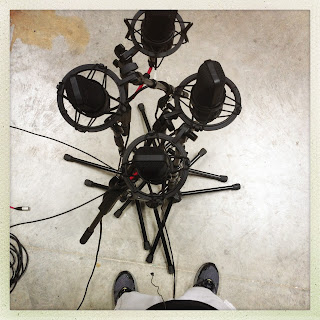 In anticipation of an upcoming quad sound library for echo | collective, I've been looking to build a specific quad kit for recording ambiances.

I ran some tests to help in purchasing decisions that I'd like to share.  To hear everything properly, you'll need a DAW, an MS decoder and a surround setup.  Files are downloadable here.

I really like quad for surround ambiances - four mic perspectives really does give a very cool spacial perspective to ambiances, and for film work they drop into bgfx tracks seamlessly while leaving the center channel open and clear for dialogue and foley.

The biggest question I needed to answer before upgrading the kit was: is it better to run dual ORTF, spaced pair, or dual MS to get the most natural sound?

Each setup has its plusses and minuses outside of the pure sound of the setup, but I chose to evaluate the pure sonics first, and then use that as the jumping off point for any further decisions.

The main thing I was interested in was in seeing how the imaging would work for sounds that move around within the ambient field.  If a bird or person or whatever moves from front left to rear right, I want the clearest imaging of that movement I can get.  Of particular interest to me is the way the different setups track movement from L to Ls or from Rs to R, as this is the trickier movement to track realistically.

I chose to use four Audio Technica 4050s to conduct the test, primarily because  I have access to four of these mics, and secondly because the AT4050 can switch from cardioid to figure 8, so that meant that I could objectively evaluate the setup on its own merits without having to compensate for listening to different mics for the diff setups.

I also chose to record in our warehouse because I wanted to test these arrays in a reverberant space with a moderate noise floor, since that'll be the primary type of ambiance that I intend to record. 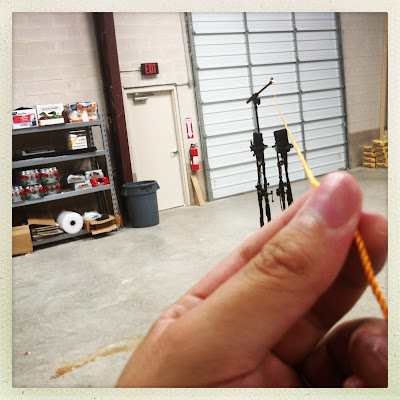 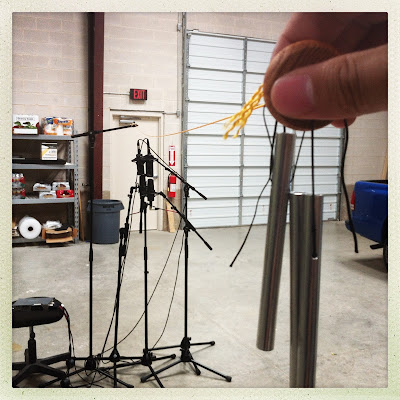 My methodology was a follows:

First up was the dual ORTF array. 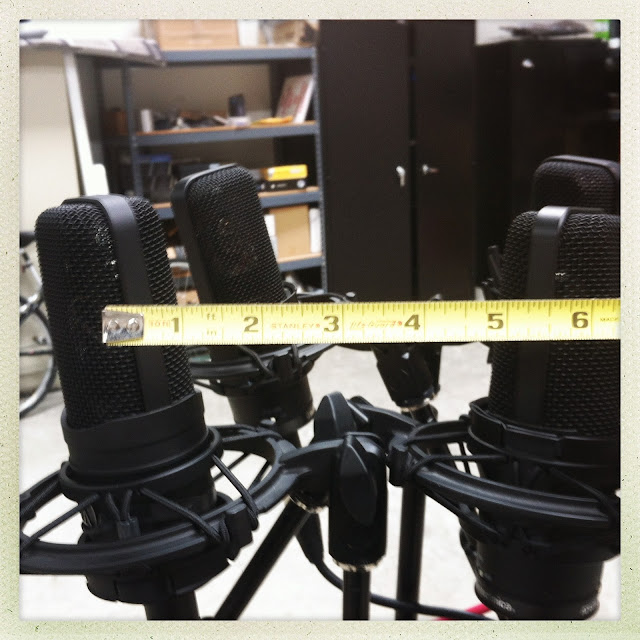 ORTF is defined as two capsules about 17cm (6.69 inches) apart and angled 110 degrees from one another.

110 degrees adds up to 440 total degrees, so adhering to that standard would end up with the wide 100degree  front and rear angles and a more narrow 70 degree angle between the L and Ls and the R and Rs (if all capsules are equidistant from one another)

Since I was so concerned about tracking from front to rear and back, I decided to narrow the angles a bit and go with a more symmetrical four corner design.  here's the difference: 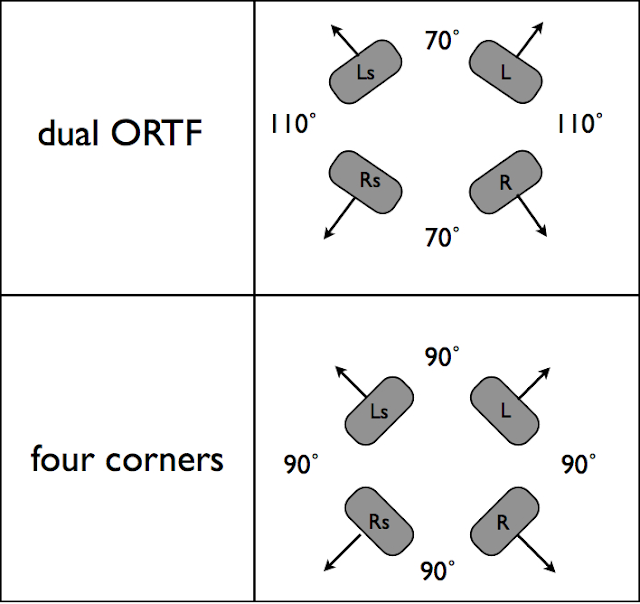 In the recordings, I found this setup to be very natural sounding, and to have the benefit of being relatively compact.  If I were using small diaphragm condensers I'd be able to pack a rig like this into a large blimp or a pair of blimps.  I could also custom build a square framed mic mount that could just pop on top of a single mic stand in an indoor environment.

Tracking around the room seemed to be very stable with this setup, if a little compact sounding.

The second setup was a spaced pair.


I left the angles of the mics at 90 degrees and set the mics themselves 6 feet apart at the corners of a square. 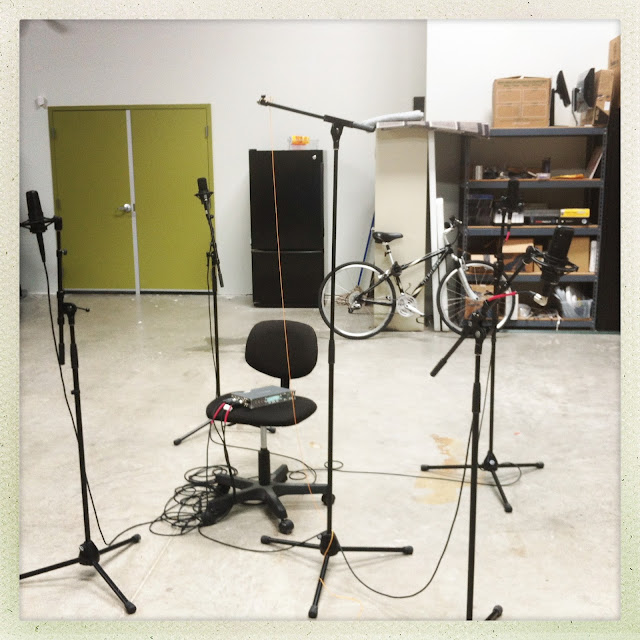 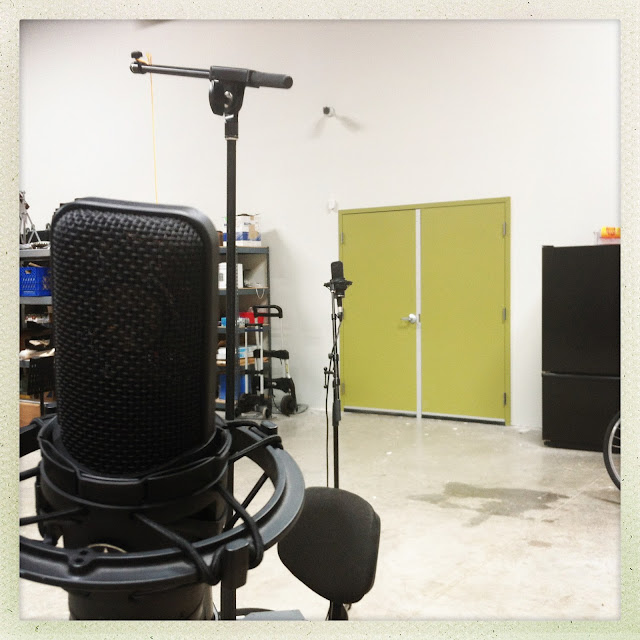 In my final evaluation, this was easily my favorite sound.  the ambiance was super wide, yet the tracking across the various speakers was superb, and far more defined than the other, tighter arrays.  I could really feel where I was in the room, and at no point did I feel any holes or dropouts.

If I have total control over a quad environment, this is going to be the way that I will record.

The last setup was dual MS.


I ran each M at 180 degrees from one another, and kept them relatively close to each other.

After running the test, I came across this photo, which showed a dual MS setup sitting comfortably inside of a single blimp.

In that setup the rear M channel is slightly offset, so if you'd like to approximate that sound with my test, just decode the rear portion using the S from the front portion (discarding the rear S channel I recorded) 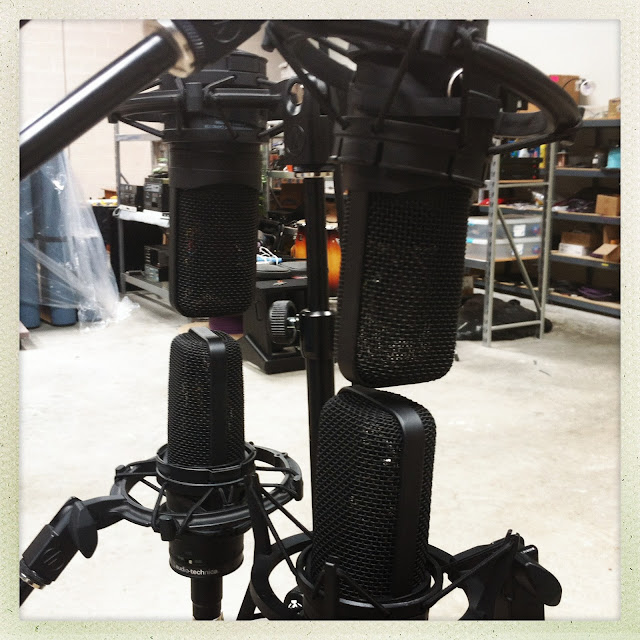 Upon listening, I found the dual MS setup to be the least satisfying.  The fridge in the room kicked on during this test, but I felt that after decoding it sounded even noisier than what the fridge added.

The pattern was also super tight, and it was more difficult to track movement around the room from the distance that I was walking it.

The dual MS rig is clearly the most convenient, but also the least impressive sounding of the three setups I tested.

In the end, I encourage you to pull down the files and listen to them to make your own assessments.

After hearing the tests I opted for a quad cardioid approach rather than a dual MS one, and if I control things to the degree that I'd like, I'll be spreading those mics out very wide within the rooms that I'll be recording.

Quad four corners is probably the most cumbersome to setup, and it's impossible to do it stealth style, which is a shame because it yields what is to my ears the best overall results.  It'll be my default for quad nature recordings though, and for interiors where I have control over mic positions.

When I need to have a smaller footprint the narrower four corners is a nice substitute for public space recording, and proper wind protection is probably achievable.

I'm a little bummed that the dual MS didn't stack up better because that's by far the most convenient rig to put together (3 channels and it fits in one blimp), but I suppose that's why we do the tests.  :)

In the future I may run one more test where I place the mics in the corners of the room and walk the same circle inside of the mics instead of outside of the array.