The little clown-nose wind protector that comes on the H4 just doesn't provide enough wind protection. I took it out during a recent trip to west Texas, and while I was able to get a bunch of good stuff, my ratio of unusable to useable was probably 10:1 due to wind noise that was being caught with the slightest breeze out there. 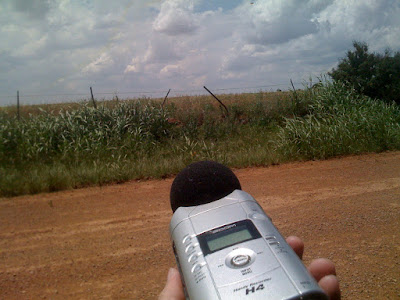 I was kind of disappointed with that once I got back into the studio because I really was hoping for a greater variety of useable stuff. One location in particular had a very distinct insect sound going, but in the non-windy spots I had a prop plane running overhead - so I did what I could but it wasnt as good as it could have been. Fortunately this was just for library stuff so it was non-critical, but I expect more from my little rig.

I had been brainstorming a little home made rycote style rig for the H4 with suspension and pantyhose as an additional wind buffer, but while the lovely Mrs and I were out at the pet store we found an unstuffed dog toy that looked almost exactly like the little afros that rycote actually sells for things like mine.

This looked like it made all kinds of sense and was far far less involved (or expensive) than building a suspension rig for the thing, so we picked it up and set out to mod it. 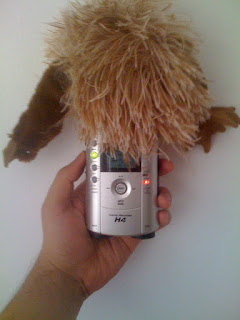 I think its kind of cool in a sick kind of broken duck back kind of way.

Initial recording tests showed a HUGE improvement, so I'm going to have to go out again and see how she holds up in a tougher environment. The other challenge is keeping it away from the dog.
Posted by Unknown at 6:57 PM 1 comment: