A recording of Occupy Dallas

I'll preface this by saying that this is not a political blog, its an audio one.  This post is about the unique audio I was able to record yesterday.

I'm fascinated with how crowds of people sound, and while I'm always recording sports crowds I find protest and riot crowds to be the most unique and intriguing.  There's an energy there that you can't fake, and I was certainly trolling around for some recordings after the Madison protests and the Vancouver riots happened - but to no avail. 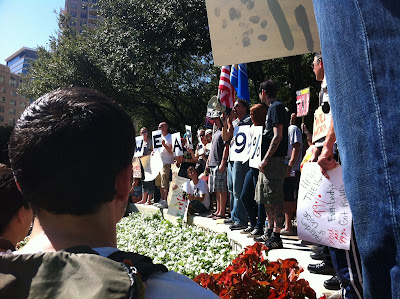 Yesterday I was sitting around deciding whether to go record the Texas State Fair or to head downtown and record Occupy Dallas - a protest group that's formed locally in solidarity with Occupy Wallstreet.

After checking their blog, I found that Occupy Dallas was planning a march on Goldman Sachs and I decided that I'd opt for that because I didn't know how many big opportunities I would have to record a good protest locally and in a fairly safe manner.

After a little thought I decided against going full stealth for this one.  I figured that there would be tons of media out there, both from within the protest and externally so I'd probably be fine with a proper mic pair up in the air.  I loaded up my low profile rig that consists of a pair of Line Audio CM3s in ORTF inside of a Rode blimp recorded into a Sony PCM D50 - all packed into a messenger bag.  I went with a gray shirt and blue jeans so as to not draw too much extra attention to myself though.  No hat, no sunglasses.

The blog said that the march was scheduled for 1pm, and by the time I was packed and tested it was already 1:45ish, so instead of heading to the OD headquarters at city hall I went straight to the Goldman offices in uptown.  Sure enough, there they were with a pretty large presence and the police holding a perimeter around them.  I parked about a block up and became painfully aware of how much like a bomb my audio rig still looks.  I must change that in the future. 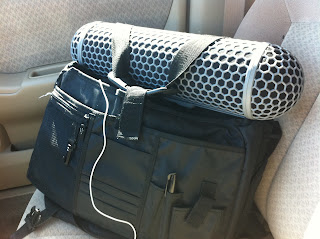 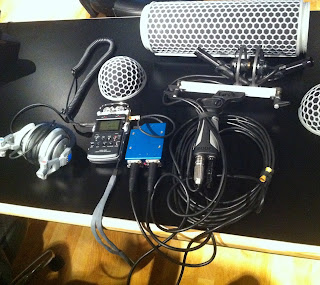 After a few speeches and chants the event seemed wrapped up and the crowd started its march back downtown to city hall.

I made the decision that I hadn't recorded enough material yet and there was too much gold just walking away from me, so I loaded up and started walking with the group, having no idea what the route was or how far they would be headed.  We ended up heading about 3 miles south and the march took about 30 minutes, with chants and cheers going on the whole way.  It was a very parade like vibe, both serious and light hearted.

It was also a pure clinic on populist chants and callbacks.  One of the leaders had them all loaded up and ready to go, and the group was right on with the responses. 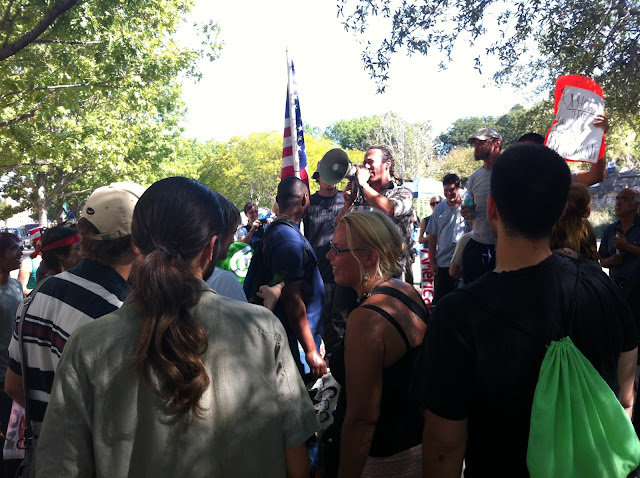 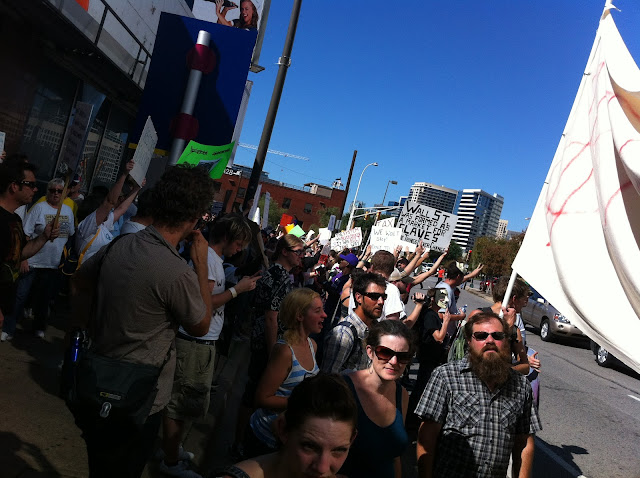 There were times during the march when the group was spread out enough that it had overlapping chants going on at the front vs the back of the line.  At other times the group was more bunched up and had the effect of sounding larger and more cohesive.  Occasionally passing motorists would honk their horns and get cheers from the group.

By far the coolest audio event of the day was when the crowd marched under an interstate overpass.  All of the sudden there was this incredible city reverb washing over the entire group.  Everyone perceived it affected the tempo and intensity of the chants.  I have a byte of that at the end of the soundcloud link above, and I have a little iphone video as well.  You can hear how much it dries up once the group comes out from under the bridge.

Once everyone reached the base camp at city hall downtown everyone kind of settled in and took a break.  I bought some ice cream from a palatero down there and after resting for a moment I walked back to my car along the same route as the march and listened to the recordings the whole way back.

In all I got about 45 minutes of great stuff.  very little editing needed, and a heck of a good recording day.  I'll save the state fair for Monday.  :)
Posted by Unknown at 11:18 AM

Hey there! I was there at this protest as a protestor - standing with the occupiers. I saw you. I am the one with the wee blonde cocker spaniel wearing protest signs. You may not remember me/us, but that's ok. :)

Thank you for posting this. I very much agree with and like your comment about the time we went under the freeway overpass:

"By far the coolest audio event of the day was when the crowd marched under an interstate overpass. All of the sudden there was this incredible city reverb washing over the entire group. Everyone perceived it affected the tempo and intensity of the chants."

Completely agreed! I was 1/3rd back from the front of the group. I remember walking underneath the overpass and being swept up with the sound, the echo, of the chanting. It was a rather enveloping feeling. I know my dog reacted to it, he stepped back for a second and I had to reassure him to go on.

I did see the dog! Interesting how many dogs were out for that one.

Its amazing how tuned in we all are to the sounds around us. That overpass just really turned the intensity up a notch.

I just noticed that's me at the beginning of your video right in the center of the camera. You'll see a blue thing in my hand. The camera is pointed to my back. That's the dog leash and as we walked forward you can see the dog.

I feel so famous! One more thing. Thank you for your blog post. This is recording history from a different perspective and I feel privileged to be a part of it.

Excellent capture of this event, Rene! Do you know if someone got a HQ recording of the Wall St one?

Well done Rene, you managed to capture yourself a good clean recording with a lovely wide stereo field. I'm surprised you were not jostled about too much to spoil the recording - perhaps they just kept clear of the bomb you were carrying :)

@andrew - haven't seen any HQ audio come out of NY yet, though I'm sure some has to exist by now. I saw another guy in the crowd here in Dallas walking around with an H2, so I'm sure that type of thing is going on around the country/world. soundcloud searches reveal mostly music at this point though.

@sonic fields - I actually ended up holding the mic up in the pistol grip for most of the event, so it looked more like what it was and less like I was trying to hide anything. There were dozens of cameras aimed at us through the entire event, so I figured looking like a media guy wasn't a bad thing in this context. I had a kid ask me if I was in the news media, and I told him "no" but unscrewed the end off my blimp and showed him the mics inside. He was impressed. :)